All for Joomla All for Webmasters
HomeProjects Manchester City Stadium Tour 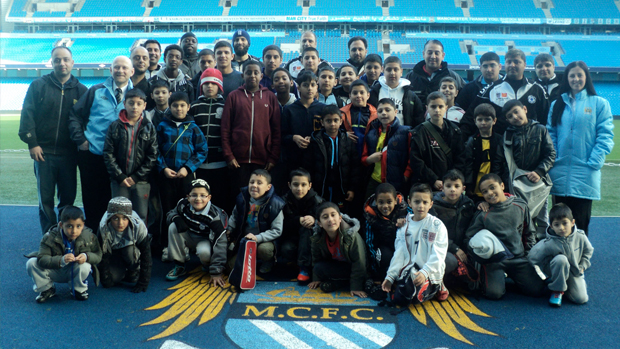 An early start was called for, for the beginning of this year’s bi-annual BYSA outing, this outing saw us take the children on a stadium tour to the home of the present premier league champions Manchester city.

This year we decided to focus on the younger members when planning our trip as we believed they deserved it for the progression they’ve made this year.

Starting at 8am on a freezing cold Sunday morning at small heath leisure centre we boarded the coach and started our journey in high spirits with jokes a plenty.

After some slight confusion on arriving at the stadium we were welcomed by Hannah and Chris who were to be our designated tour guides. We split the group in to two and started the tour

Our first stop was the stadium press gantry where the likes of sky sports and match of the day report on the games from, the kids got to sit in the seats overlooking the pitch and our tour guide Hannah introduced herself and the club to the children.

Hannah took us down to the press room were all the clubs media commitments take place.

We then moved down to the players’ lounge when the players and their families congregate before and after games , then it was on to a room which documented all man city’s results from their championship winning season and all so doubled as the trophy room were all the children and parents marvelled at the site of the premier league trophy adorned in the sky blue of man city taking pictures with the trophy and the Sergio aguero’s shirt and ball that were involved in piping man utd to the title on the final day in the final minute of the season to take the title away from united.

From there we to the players pre-match warm up area and the children enjoyed a mock penalty shootout, before moving on to the players changing rooms that was equipped with all the latest mod cons need to prepare a players for an upcoming match. We moved through to the players tunnel lining up as would the man city player before a game and made our way out on to the pitch again we took some photos and made out way back into the stadium,

We concluded the tour with a quick Q&A session with our tour guide.

We made our way of to the club shop were the children bought souvenirs, before breaking for lunch

After lunch we again boarded the coach and made our way over to the Platt lane training complex. Inside the hi-tech inflatable dome the children were treated to nearly 2 hours of professional coaching by two of man city’s youth team coach’s.